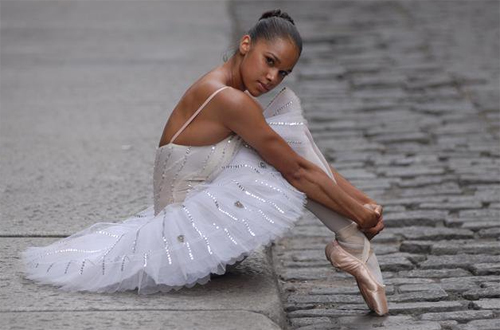 Ballerina Misty Copeland made history recently when she was promoted to principal dancer by the American Ballet Theater making her the first black dancer to be a principal dancer in the company’s 75-year history.

Copeland, who is 32, seemed to many an unlikely ballerina as she started dancing at the age of 13. She endured criticism from many along the way about her curvy body and her long legs. She remembers her first ballet class as less than stellar:  “I was so embarrassed. I didn’t know anything that the other girls in the class knew; I thought I was doing everything wrong.”

She persevered and in 2001 began dancing with the American Ballet Theater and became a soloist in 2007. She danced on tour with Prince in 2010 and has even appeared in commercials for Dr. Pepper and Under Armour, but still with success she noted in her 2014 auto-biography “Life in Motion: An Unlikely Ballerina,”  her ultimate fear: “That if I don’t rise to principal, people will feel I have failed them.”

With more than 600,000 followers on Instagram, and worldwide adoration,  it’s clear that she has failed no one.

Congratulations to Misty Copeland on her milestone. We celebrate her talent and her hard work.