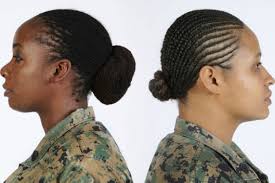 As many of you know the military has not been very natural hair friendly. They have received a ton of heat for their lack of hairstyle options for black women. Recently the Marine Corps have approved two new hairstyles for women and we are here for it!

Thin locs and two strand twist are now allowed to be worn by women in the Marine Corps. The change was made after staff sergeant Cherie Wright made the request. The decision to add both hairstyles to the approved uniform was made in October of this year.

Despite the new approval, there are still some very strict regulations on how these hairstyles can be worn. According to Military.com, all locks and twists must be smaller than 3/8ths of an inch in diameter and must be separated with a square or rectangular shaped part to keep a professional appearance.

The Marine corps will soon be adding a website full of pictures of what is acceptable and unacceptable for men and women’s hairstyles. Despite the restrictions the Marine Corps is definitely taking a step in the right direction by including more practical hairstyles for natural hair women.

Do you think adding these two new hairstyles was a move in the right direction?