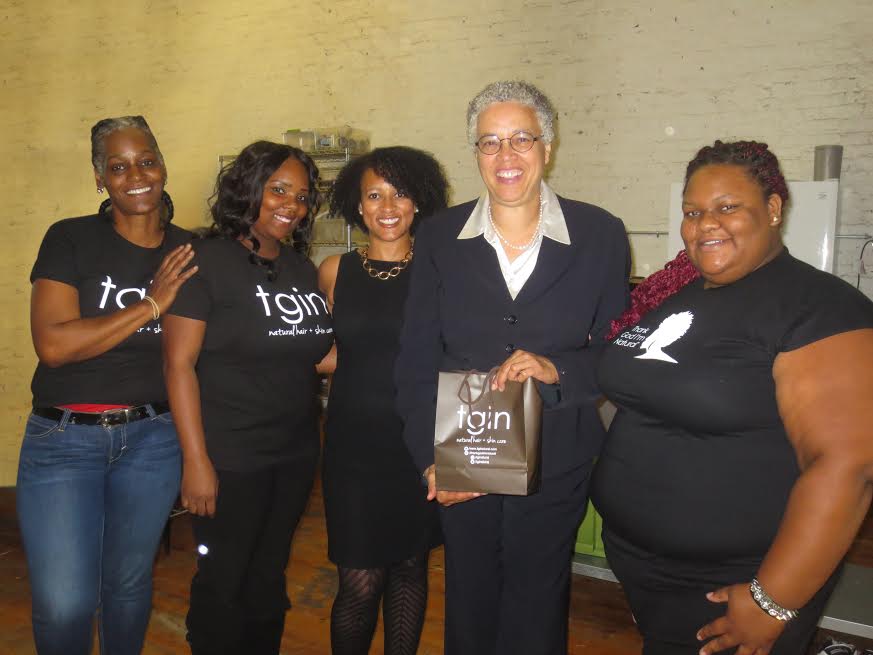 Chicago Mayor Rahm Emmanuel and Cook County Board President Toni Preckwinkle recently stopped by our building in Northwest Chicago to hold a press conference announcing the launch of  “Metro Chicago Exports.”  As part of the visit to our building, Toni Preckwinkle and several other local elected officials, and business people stopped by our suite to learn more about tgin and what our experience has been with exporting as well as our next steps after participating in the Trade Missions to Tanzania and South Africa.

Mayor Emmanuel and Board President Preckwinkle are particularly interested in supporting small business growth, given a recent McKinsey & Company study commissioned by the City of Chicago that revealed that small businesses, like Thank God It’s Natural, continue to be drivers of growth for Chicago’s economy.

We hope to continue to be part of that growth and look forward to discovering new ways to introduce our line of hair and skin care products overseas, specifically to Africa, Europe and South America. Although we’re new to exporting, which has quite a steep learning curve,  the City of Chicago and the State of Illinois has been extremely supportive of our efforts to date.

The support of our local elected officials is  largely fueled in part by the growing desire to maintain Chicago’s dominance as  the nation’s fourth largest exporter at $65 billion annually, but also as a means of increasing the global competitiveness of the American middle class, as compared to nations like China

A report by the Brookings Institute Shows that while America accounts for 21% of the global middle class today in terms of consumption in $$$, by 2030 that number will drop to less than 7%.

In 2000,  for example, the U.S. accounted for 37 percent of global car sales, while China accounted for  barely 1 percent.26 Today China has emerged as the world’s largest auto market, with 13.6  million vehicles sold in 2009, well above the 10.4 million sold in the US.27 In 2004 General  Motors sold 10 cars in the U.S. for every one car sold in China; the ratio is now quickly approaching one to one, and soon China will be a bigger market than the U.S. for America’s  largest automaker.

So, we’re just one small piece of the export puzzle, that Chicago and national politicians are looking to support as a means of helping our economy to grow and remain competitive.  And so the journey continues

More From tgin Goes to Africa

Chris-Tia Donaldson is the owner of Thank God It’s Natural and the author of the best-selling book Thank God I’m Natural: The Ultimate Guide to Caring for Natural Hair. You can follow her on Instagram @tginatural or on Facebook @thankgodimnatural. Tune in every Monday for the Target update until we launch nationwide in stores on March X, 2014.