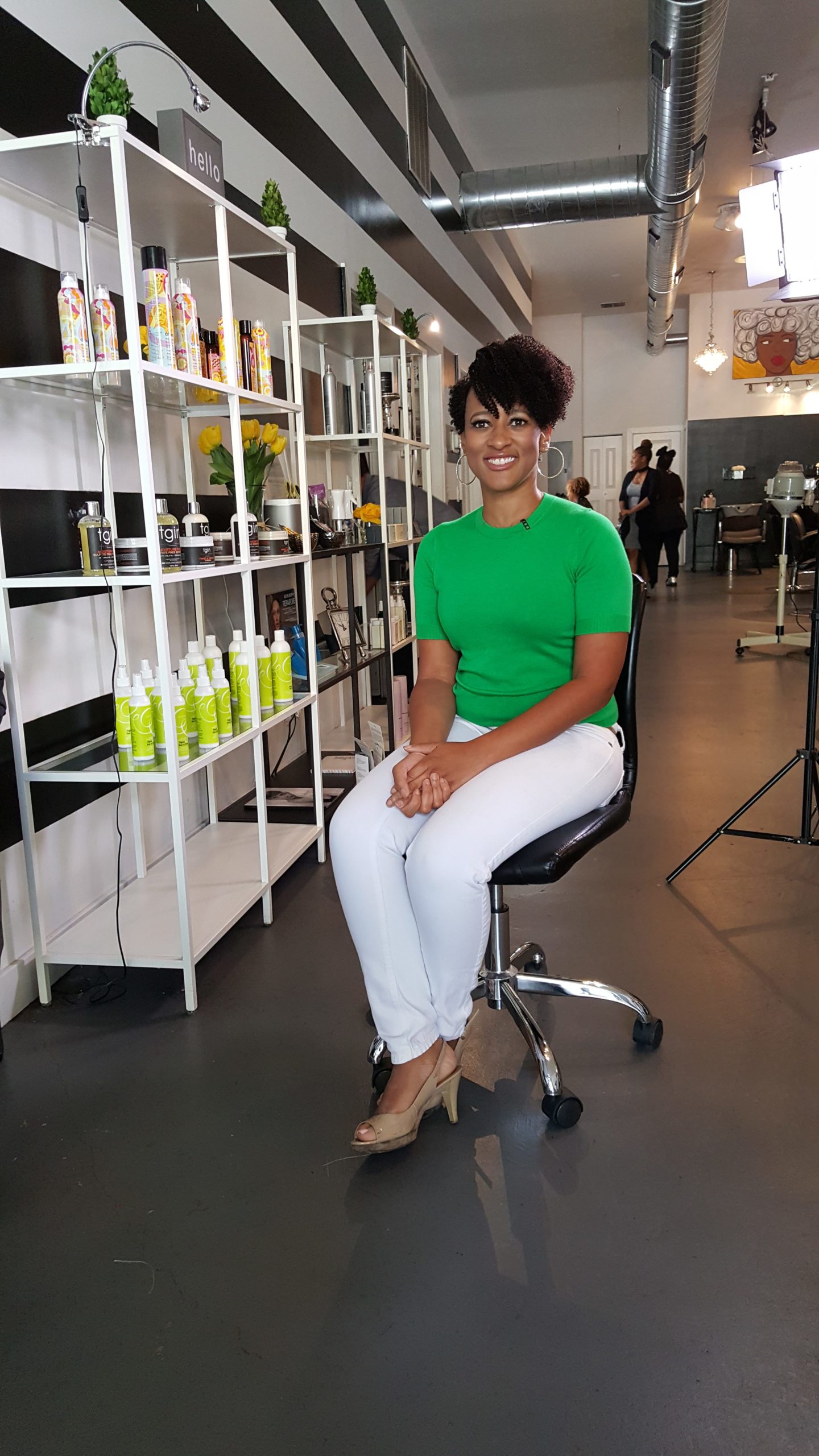 So my team had this hairbrained idea of hiring a videographer to film my first trip to the salon post breast cancer. I was apprehensive to accept the idea at first, but then I came around and got on board.

As my hair was getting longer and longer and the summer was getting hotter and hotter, I was itching to get my hair cut and colored, so I could feel “normal” again. My team, however, had to coordinate with the salon and hire a videographer, who would hit the right notes when it came to this project. They did both.

When I arrived at the Chicago Curl Collective  to get my hair done, I wasn’t expecting much. I was somewhat nervous about capturing this entire moment, which is extremely personal on camera. All I could think about was what if I didn’t like it or ended up looking like a hot mess. I was like, “Can I go to the salon one or two times and then we do the whole film thing?” My team totally vetoed that idea, because they wanted this makeover to be all the way real.

I was also scared about getting a scissor happy stylist. After waiting for so long to have hair again, I didn’t want to go in for a trim and come out with a disaster of a haircut. That would have been no bueno, as I was trying to grow my hair back to its old length and condition. Plus, if I am  going to keep it all the way real, I wasn’t used to having short hair, so it felt daunting to go off script.

Needless to say, I was pleased with the results, and super grateful to Daria and Kyra at Curl Collective and Her Given Hair for hooking me up.

One of the questions I get the most along this journey is “How did it feel to lose your hair?”

As a woman and the CEO of a hair care company, hair is a pretty big deal. Many of us define our femininity by how long or short are hair is, or dye and color it everything from blonde to pink to express our creativity.  Even though it’s just hair, it’s a huge part of who we are.

When I was diagnosed with breast cancer, given my age, my doctor informed that it was necessary to have chemotherapy, which is a more aggressive form of treatment to ensure that you have no traces of malignant cells remaining after the cancer has been surgically removed, which in my case happened via a lumpectomy.

Although I was sad to be losing my hair, and was given the option of using a cold cap to preserve my hair during treatment, I opted to just shave it off and go all the way in. I had so many other issues to deal with as it related to my health during this time that my hair was the least of my worries. Luckily enough, I was able to find wigs that I felt looked “natural enough” to get me through this ordeal. Still, there were times when I was scared I was going to be running this hair care company that celebrated women wearing their hair naturally and was not going to have any hair of my own. It was one of my biggest fears.

After treatment ended and I “won” my battle with cancer, I was somewhat anxious for my hair to grow back again.

I can remember looking at all the people on Instagram who had chemo, and seeing their hair grow back faster than mine. One girl in particular had  hair that  came in super fast, and in some instances, people’s hair started to grow back even before chemo was finished. It took my hair almost seven months after chemo was done to really just start coming in. During those seven months, I sometimes felt discouraged and tried to stay hopeful throughout the process. I know it’s just hair, but when you’re running a hair care company, it can become a big piece of who you are, sadly enough.

I was also extremely nervous; because I had a small bald spot in the top of my head that I was scared was going to be visible .

Initially when my hair was growing in, it was light and covered up parts of my head. But it was slow to come in. Once it came in, it started growing like a weed. At each stage, I was just grateful to have hair, but I was still somewhat ashamed of how it looked. You see many cancer survivors out there bald or rocking their short military crew cut, but  I had issues with self-esteem, and  issues with the fact that my head wasn’t fully covered.

On top of it all, my hair was grey in many parts, and without any product in it, it looked extremely dry. The shape was also all off because it hadn’t been trimmed. It had some length to it, but often times I looked like a cross between Bobby Brown in New Edition and one of those 80s workout instructors with a texturized mini fro. It was definitely not the look I was going for.

Plus, I was also dating a guy at the time, and I just wasn’t ready to go all in. He knew I was wearing a wig or extensions, but there is always this added layer of self-approval that we are looking for from men to validate us. It’s hard, but in many instances, so true.

It even took me a minute to get used to coming around my employees with my “natural hair”. After I had enough hair growth, I would wear a baseball cap to meetings, and they could see the soft wooly curls peeking out from underneath. Like they sometimes say, crawl, walk run.

Finally, I had to overcome the feeling and convenience of wearing a wig for close to a year and a half. I had become accustomed to having silky straight hair again like I did in my relaxer days. I wouldn’t have leaned on it as much during this time, if I actually had hair underneath my wig or my old shoulder length curls, but my hair had gone through many stages. It was like going natural all over again, when I had to struggle to accept my hair for what it was and what it wasn’t. You would think this would have been super easy, but it wasn’t. Despite being natural for nearly fifteen years, I had to learn to fall in love with my hair all over again.

Despite all the negatives, I was happy that I had just enough of hair to do product testing and started working with a chemist again to develop some new conditioners and other products. During the time when I was going through chemo, I had no hair and had to rely on others to tell me their feedback on how the products worked for them.  I had to just ask the right questions, and go by the look and the feel. It was challenging, but we hit some home runs with our Curl Bomb Moisturizing Styling Gel and our Smooth & Hold Edge Control, which I actually get to use on my hair today.

Now, I’m out here rocking a short haircut, and enjoying what life brings my way hair, health, love, and business wise. I was a little nervous about going short, but I’ve actually gotten a lot of compliments and I’m open to all the changes and awkward moments that happen over the next few months of this new love story that is my  hair journey is concerned. It’s truly a beautiful thing.