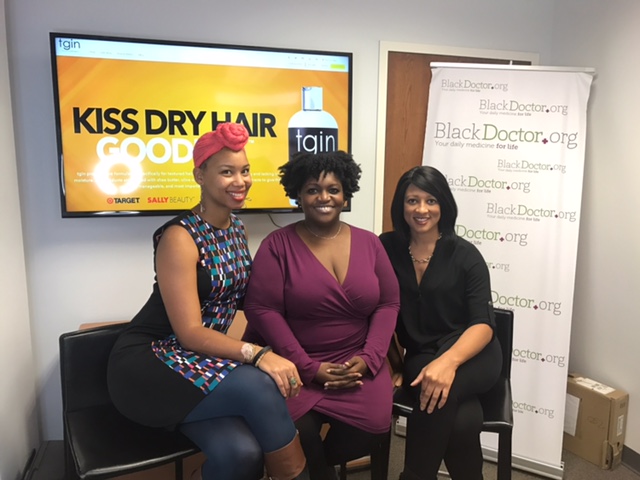 Recently, our CEO, Chris-Tia Donaldson was honored to be a guest on BlackDoctor.org Facebook Live.  Chris-Tia had a chance to share parts of her breast cancer journey, and answer some questions you might have about treatment and prevention.

You can read Chris-Tia’s Q&A of the Facebook Live event here:

1.  I remember running into you often at LA Fitness years ago and I’m guessing your health is something that you take very seriously. Was the possibility of breast cancer something that was on your radar?

Absolutely not. There is no history of breast cancer in my family. I was also just 36 at the time of my diagnosis. When I thought of breast cancer, I thought of people like Sheryl Crow, Melissa Ethridge, Joan Lunden, Suzanne Sommers and Christina Applegate. I never gave much consideration that this was something that could happen to me.

2.  How did your diagnosis come about?  Did you discover something abnormal during a self exam?

I was actually taking a shower and noticed it then. Initially, I thought it was hormonal related, because I had a cyst removed from my breast in my 20s. Given my age and the fact that I felt perfectly healthy, breast cancer was the furthest thing from my mind. After two to three months passed, I made an appointment to see my doctor. Although she did not think it was cancer given the lump’s size, shape and the fact that it was soft and movable, she still recommended a mammogram just to be safe.

3.  Your diagnosis came at the time of some very important business deals for TGIN and you pushed forward as planned. How did you know that was the right course of action for you, rather than stepping away to focus strictly on treatment?

When I first was diagnosed, my doctor asked me when could I start chemotherapy. I told them I had a meeting with Target on 3/22 that I had to look good for. Based on that, we scheduled my treatments in such a way, that I would be off and looking and feeling good for that meeting. But, I soon learned that, you can’t plan for everything, because we ended up getting calls to do meetings with Walgreen’s and Rite Aid and I just had to wing it even though I was at my weakest.

4.  Describe your treatment plan and experience with chemotherapy.

I had a lumpectomy, followed by 8 rounds of chemotherapy and 33 rounds of radiation. My doctors were extremely aggressive with their choice of treatment given my age. In older women, they tend to only do a lumpectomy and radiation, if the size of the mass is small, because of their shorter life expectancy.

In terms of the side effects, the biggest thing is extreme fatigue and mild nausea. Although I’ve never been pregnant before, I would say it is akin to a really awful pregnancy. I basically dealt with the side effects by taking it easy and resting a lot.

5. With hair and beauty being such a large part of what you do, were you concerned about losing your hair?

Of course, I was really nervous about losing my hair, especially since I run a hair care company. I’m supposed to be out there being the face of this hair care company, wheeling and dealing, and spreading knowledge of all things natural, so I felt a little nervous at times donning a wig. But it’s all good. I’ve never had any major issues or anyone say anything to me too crazy. The natural community has also shown me nothing but love since learning of my diagnosis.

Now product development is a different story. I’m the primary tester of our products before they are released for testing by a group and so I was in a real crunch to expedite our product development cycle in order to develop our Edge Control and Curl Bomb Moisturizing Styling Gel before I had to shave my head for treatment.

Now, that my hair is growing back, it’s back to the same old testing. But my hair is a little different now and I’m waiting to see if it will go back to its old texture.

6. What are some things you did that helped you stay encouraged?

When I was first diagnosed and going through treatment, I would often “lurk” (okay maybe “stalk”) on the pages of people going through breast cancer treatment. Most people were extremely positive, and I would kind of live vicariously through their pictures, which allowed me to see the light at the end of the tunnel.

7. What advice can share to women who may be newly diagnosed, or have a feeling something isn’t right but are afraid to bring it up to their doctor?

Advancements in cancer treatment have come a really long way. If caught early, breast cancer is a treatable disease and is not a death sentence. The important thing is to know your breasts, stay in tune with your body, and talk to your doctor if you experience any major changes.

Also, trust your instincts. If something doesn’t feel right, listen to your gut. If you don’t feel like your doctor is giving you the best advice, seek a second opinion.

The plan is to continue to focus on building and growing the business. Next year, we’ll be in more Target and Sally Beauty stores, plus we’re making a foray into the drug store market by launching in Walgreen’s, CVS and Rite Aid.

Given the overwhelming feedback to my story on Instagram, I’m writing a book called This is Only a Test: What Breast Cancer Taught Me About Love, Hair, Faith and Business.

9.  Tell us about your start – a lot of people may not know that you started at Harvard.

So, I went to Harvard for College and Law School. It seems like ages ago, but I tell people the funny thing is back then we were strongly encouraged to go into careers like medicine, business and law. Entrepreneurship was for the kids who “couldn’t get it right” But of course, Mark Zuckenberg changed all of that and the rest is history.

As far as tgin goes, back in 2009, I wrote a book called, Thank God I’m Natural to help dispel some of the most common myths and misconceptions  about kinky hair.   Like so many black women living in America, I spent almost a quarter century wishing for hair that looked nothing like my own, and thought I couldn’t wear my hair in its natural state, because my tresses looked nothing like Alicia Keys’ or Mariah Carey’s. Having a relaxer was so restrictive. It meant spending your entire Saturday in a beauty shop, or running from the rain, or not being able to go swimming when on vacation.  When I decided to let go of chemical straighteners and go natural, I felt I had finally reached a point in my life, where I could say Thank God I’m Natural.

As a follow up to the book, we released a line of products by a similar name, called “Thank God It’s Natural” or “tgin”

10.   With the products- did you start by creating/making your own batches of product?

We did. But I quickly learned that my greatest strength was in product testing and in the business side of things. My sister and niece are way better cooks then me, so when we started out with shea butters, we were making it in their kitchen. It was my niece’s job when she was in high school and college.

11.  What was it like for you to not “second guess” yourself and blow it off?

Initially, I didn’t take the lump seriously, because I thought it was hormonal related. But after two or three months of not seeing any changes and talking it over with my girlfriends, I made the decision to take action and see a doctor. It was the best thing I could have ever done.

12.  Did you have any second thoughts about doing chemo or were you on board right away?

I went to a Chinese doctor for a second opinion. But, I wasn’t taking any changes. With early detection, breast cancer can be treatable. I wanted to make sure I was doing everything I could to have the best possible outcomes, which is why I chose to be treated at Northwestern University Prentis Hospital.

13.  What did you do to maintain a level of peace during this whole process?

I just talked to God and took one day at a time.

14.  Do you have a deeper appreciation for what makes you beautiful internally after this whole process?

I sure do. Now, I’m much more conscious of my internal spirit and how that is so much more important than the hair we have (or don’t have) and the makeup we wear.

A huge thank you to our friends at BlackDoctor.org!